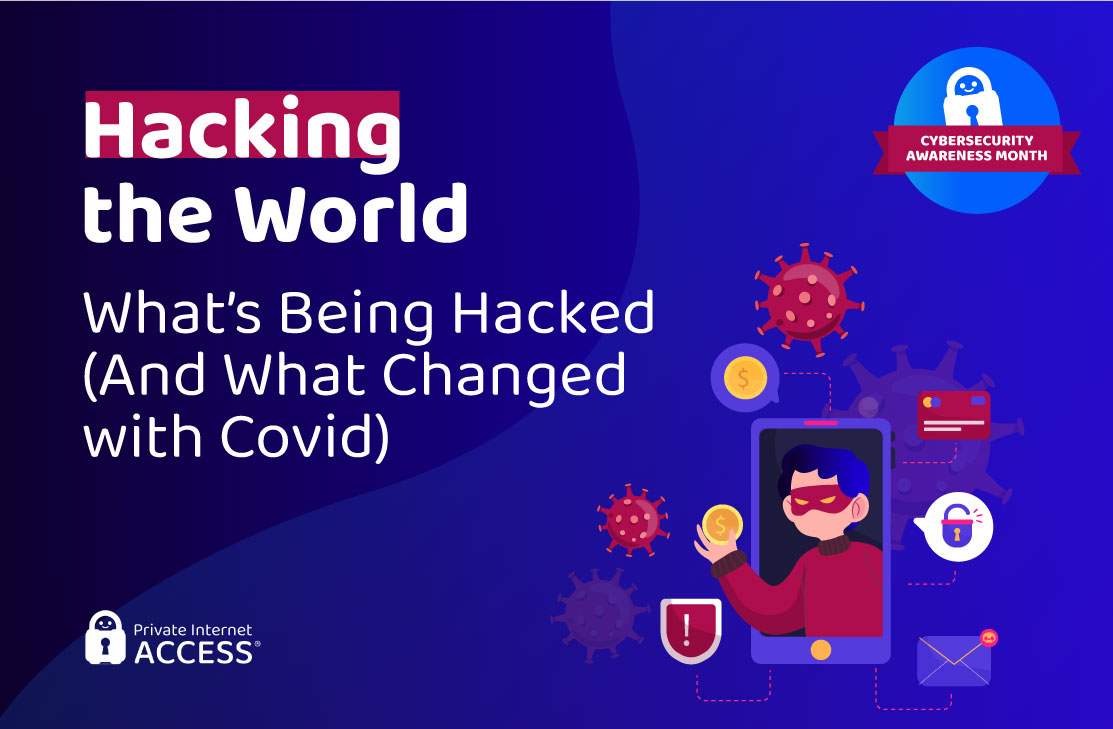 Each week in October, as part of Cybersecurity Awareness Month, we’ll publish an article packed with facts and stats, to give you an in-depth look at the state of cybersecurity in today’s world. We’ll start with the basics, then cover vulnerabilities, risks, costs – and much more.

Following Part 1: Hacking Basics of our Hacking the World series, in Part 2 we’re focusing on what exactly is being hacked – from data to devices and applications. And, extending a nod to the impact the pandemic has had, we’ve also included several facts about hacking during times of COVID-19.

Need a refresher of key hacking terms and definitions? Here’s a link to our helpful cybersecurity glossary we published in Part 1.

Jump to a section below, or read on:

The data, devices, and applications that hackers target with cyberattacks, and the methods they use to conduct these attacks.

Companies collect a treasure trove of sensitive customer data: names, addresses, bank details, credit card information, even medical records. All of this information is readily available to employees and poorly protected more often than not.

This is music to the ears of your average hacker. Financial data is valuable and can allow criminals to carry out any number of fraudulent activities.

The vulnerability and value of financial records explain why finance companies were such a common target during COVID-19. As employees worked hard to soften the ensuing economic turmoil, cybercriminals were busy leveraging phishing attempts, hacking systems, and capitalizing on employee errors.

Globally, the financial sector experienced a 238% increase in cyberattacks from February 2020 to the end of April 2020.  Altogether, nearly three-quarters of financial companies were attacked in 2020.

Losing financial records is costly. According to the Ponemon Institute, cyberattacks cost the average banking company $18.3 million in 2020.

Hackers exploit web applications, miscellaneous errors, and “everything else” (including phishing and social engineering) in 81% of financial data breaches.

In the financial industry, hackers are making off with customer credentials in 35% of successful hacks and bank details in 32% of cases. At the very least, hackers gain access to PII (77% of breaches).

Healthcare records are targeted by hackers because of their high value.

Hackers can supplement attacks for several years when they obtain medical records, as opposed to other records like payment card information. These records are usually no longer useful after a single fraudulent attempt.

Hacking is the number one cause of data breaches in the healthcare industry. Valuable medical records are the target of hacks in the majority of cases.

This is a prevalent issue that only seems to be getting worse. Verizon notes that healthcare data breaches increased by 58% in 2020. A year that saw 30 million healthcare records exposed in OCR published breaches alone.

So how are hackers stealing medical records? Tenable research notes ransomware is the biggest threat to healthcare data. In 2020, ransomware attacks cost US healthcare institutions $20.8 billion.

Hackers can carry out an array of fraudulent activities and different types of identity theft with medical records and financial records. The FTC received a huge increase in complaints in 2020. In particular, 1.4 million complaints were noted as identity theft, while 2.2 million public complaints referenced fraud.

Which Components Are Vulnerable?

Now let’s take a look at the most vulnerable devices, applications, and systems that hackers can target.

Mobile devices and IoT devices have a high risk of suffering a cyberattack.

Mobile devices often have outdated cybersecurity technology (older versions of Android & IOS are particularly vulnerable). They can suffer malware attacks from malicious apps or smishing attempts. In a Verizon study, 90% of companies suffered a mobile device compromise in 2020 and rated the effect “moderate” or worse.

IoT devices are another vulnerable technology. IoT describes the “internet of things” — networks of physical objects interconnected with microchips. This could be smart heart sensors, for example, which relay data back to doctors.

What’s more, these devices are wildly unprepared to defend against the threat of hackers. The vast majority of sectors rate their IoT devices as “inadequate” to some degree.

This explains why hackers are focusing on IoT devices regularly. IoT attacks rose by 35% in 2020 compared to 2H 2019.

Authentication features are the primary area in need of improvement. It’s simply too easy for hackers to gain access.

Access control features need to be updated, too, while data encryption should be far better.

Mobile malware is a concern for mobile device users.

Hiddad malware is the number…

Read More:Hacking the World – Part 2: What’s Being Hacked (And What Changed with Covid)