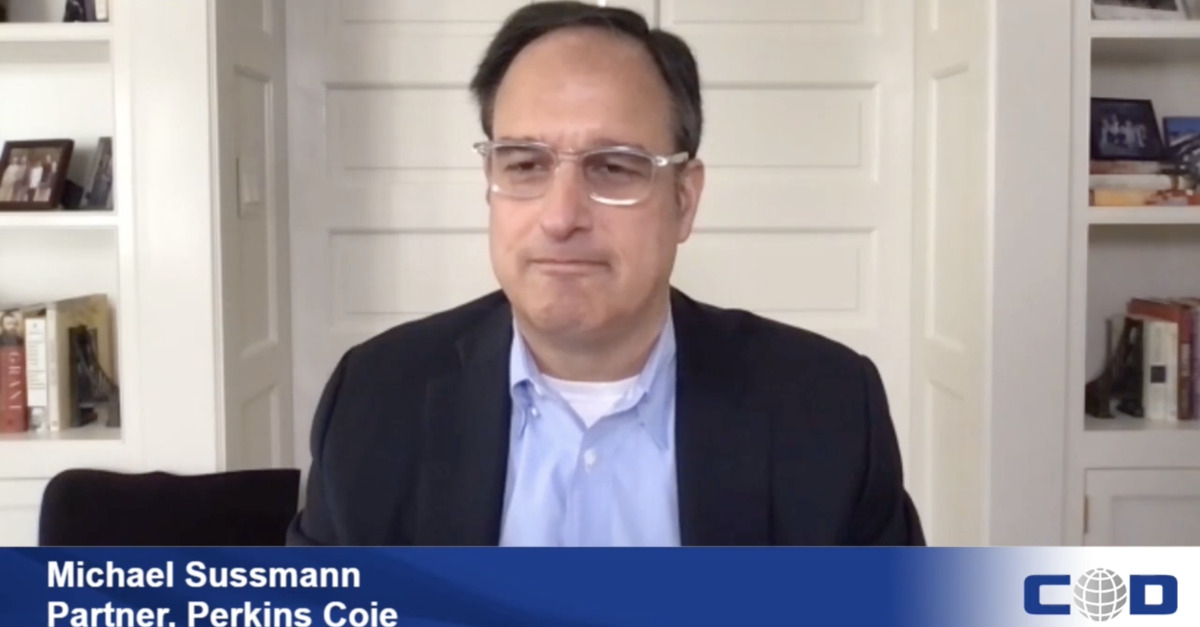 Update: Sussmann has officially been indicted in the U.S. District Court for the District of Columbia on a lone false statements charge.

The 27-page indictment alleges the defendant “lied about the capacity in which he was providing [information] to the FBI.”

The court document specifically claims that Sussmann “stated falsely” that he was not working “for any client” when provided the FBI with information about the Trump 2016 presidential campaign. Rather, Durham alleges, Sussmann was working on behalf of a tech industry executive, an internet company and the 2016 Clinton presidential campaign.

The U.S. Department of Justice is set to indict a high-profile cybersecurity lawyer who previously worked for the Hillary Clinton presidential campaign and who is currently a partner at the Democratic National Committee’s longtime law firm, Perkins Coie.

According to the Times, special counsel John Durham is set on presenting the case to a grand jury and Attorney General Merrick Garland did not overrule the decision, though he could do so, according to anonymous sources said to be “familiar with the matter.”

The would-be indictment is reportedly based on a conversation that attorney Michael Sussmann had on Sept. 19, 2016 with the FBI’s then-top lawyer James A. Baker. During that conversation, Sussmann is said to have allegedly lied to the FBI about various aspects of a cybersecurity presentation–including whether he was there on behalf of a client and, if so, who exactly he was working for at the time.

At the meeting, Mr. Sussmann relayed data and analysis from cybersecurity researchers who thought that odd internet data might be evidence of a covert communications channel between computer servers associated with the Trump Organization and with Alfa Bank, a Kremlin-linked Russian financial institution.

The decision on whether or not to charge Sussmann will likely come within the next few days because the statute of limitations for lying to the FBI is five years and such charges will be unavailable to the DOJ after the 19th of this month–this coming Sunday.

Attorneys for the lawyer, however, believe an indictment is imminent.

“Michael Sussmann is a highly respected national security and cyber security lawyer, who served the U.S. Department of Justice during Democratic and Republican administrations alike,” Latham & Watkins defense lawyers Sean Berkowitz and Michael Bosworth said in a statement provided to multiple outlets. “Any prosecution here would be baseless, unprecedented, and an unwarranted deviation from the apolitical and principled way in which the Department of Justice is supposed to do its work. We are confident that if Mr. Sussmann is charged, he will prevail at trial and vindicate his good name.”

Sussmann is a former federal prosecutor who spent 12 years at the DOJ working in various roles. While there, he served as a senior attorney in the Computer Crime and Intellectual Property Section where he investigated and prosecuted “computer intrusions and other internet-related crimes,” according to his staff biography.

Sussmann also worked as an assistant U.S. Attorney out of the Eastern District of Virginia where he focused on white-collar and violent crimes. Before that, he worked as an assistant to the assistant attorney general for the DOJ’s Criminal Division. Something of a legal expert, Sussmann is a contributing author to multiple DOJ manuals about prosecuting computer crimes and intellectual property crimes.

The 57-year-old hails from New Jersey and attended Rutgers University before heading to Brooklyn Law School. His legal career started in New York City where he worked for the elite and nearly 150-year-old international law firm Proskauer Rose LLP.

In typical revolving door fashion, Sussmann parlayed his governmental stint and connections into a highly-paid position at the similarly elite Perkins Coie law firm–where he has worked for the past 16 years.

“He is engaged in some of the most sophisticated and high-stakes matters today, taking on global data breaches, government investigations, and other bet-the-company representations,” his biography for the firm notes. “Michael’s more notable work includes his past representation of the Democratic National Committee and Hillary Clinton’s presidential campaign in their responses to Russian hacking in the 2016 presidential election.”

That sketch goes on to detail some of his work:

Michael has regularly conducted extensive corporate privacy and cybersecurity reviews and represented Fortune 100 companies before the FTC, U.S. Department of Justice (DOJ), state attorneys general, and congressional committees. He is a former cybercrime prosecutor who has assisted many of the world’s largest companies in their responses to sophisticated network intrusions.

Michael has advised email and wireless providers, social networks, and other communications providers on all aspects of regulatory compliance. He has particular experience in surveillance issues relating to the Electronic Communications Privacy Act and the Foreign Intelligence Surveillance Act (FISA). Michael’s national security portfolio has included counseling on government contracting, foreign-based investments in or threats to U.S. infrastructure, and handling of classified information.

Sussmann, along with his current firm, have long served as foils for the former president and his conservative allies.

An October 2018 opinion article (“Who Is Michael Sussmann?“) by Wall Street Journal editorial board member Kimberley A. Strassel incorrectly assailed Sussmann as the “point man for the firm’s D.N.C. and Clinton campaign accounts.” Perkins Coie wrote a letter to the editor (“Our Michael Sussmann Is an Honorable Man“) to point out the mistake–noting Sussman’s work was solely related to hacking.

One week before that opinion piece was published, Sussmann’s (misspelled) name came up 36 times during Baker’s testimony before the House Judiciary and Oversight Committees. One week after Strassel’s piece ran, Sussmann’s name came up another 22 times.

During that testimony, Baker revealed that Sussmann provided the FBI with material “unrelated to the dossier” but related to “another investigative matter,” drawing a distinction between the infamous and tawdry Steele dossier and the broader Russia-focused counterintelligence investigation into Donald Trump’s 2016 campaign.

“So when Mr. Sussmann came to you to provide some evidence, you were not specifically aware that he was representing the DNC or the Hillary Clinton campaign at the time?” House counsel Valerie Shen asked…