TripleCross is a Linux eBPF rootkit that demonstrates the offensive capabilities of the eBPF technology.

TripleCross is inspired by previous implant designs in this area, notably the works of Jeff Dileo at DEFCON 271, Pat Hogan at DEFCON 292, Guillaume Fournier and Sylvain Afchain also at DEFCON 293, and Kris Nóva’s Boopkit4. We reuse and extend some of the techniques pioneered by these previous explorations of the offensive capabilities of eBPF technology.

This rootkit was created for my Bachelor’s Thesis at UC3M. More details about its design are provided in the thesis document.

This rookit is purely for educational and academic purposes. The software is provided “as is” and the authors are not responsible for any damage or mishaps that may occur during its use.

Do not attempt to use TripleCross to violate the law. Misuse of the provided software and information may result in criminal charges.

The following figure shows the architecture of TripleCross and its modules. 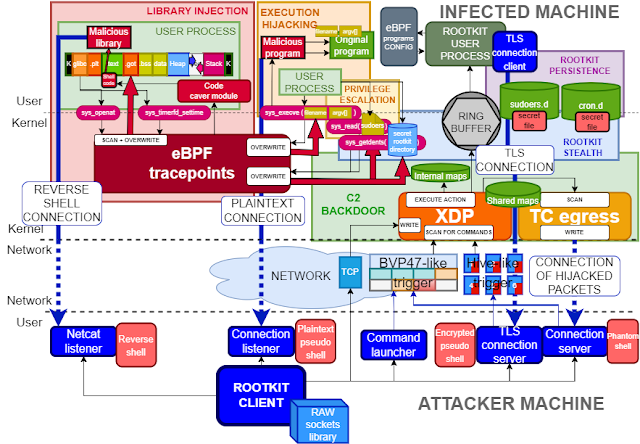 The raw sockets library RawTCP_Lib used for rootkit transmissions is of my authorship and has its own repository.

The following table describes the main source code files and directories to ease its navigation:

This research project has been tested under the following environments:

We recommend using Ubuntu 21.04, which by default will incorporate the software versions shown here. Otherwise, some of the problems you may run into are described here.

The following table describes the purpose of each Makefile in detail:

Once the rootkit files are generated under src/bin/, the tc.o and kit programs must be loaded in order. In the following example, the rootkit backdoor will operate in the network interface enp0s3:

There are two scripts, packager.sh and deployer.sh, that compile and install the rootkit automatically, just as an attacker would do in a real attack scenario.

These scripts must first be configured with the following parameters for the proper functioning of the persistence module:

The rootkit can hijack the execution of processes that call the sys_timerfd_settime or sys_openat system calls. This is achieved by overwriting the Global Offset Table (GOT) section at the virtual memory of the process making the call. This leads to a malicious library (src/helpers/injection_lib.c) being executed. The library will spawn a reverse shell to the attacker machine, and then returns the flow of execution to the original function without crashing the process.

TripleCross is prepared to bypass common ELF hardening techniques, including:

It is also prepared to work with Intel CET-compatible code.

The module configuration is set via the following constants:

Receiving a reverse shell from the attacker machine can be done with netcat:

Library injection via GOT hijacking technique

The technique incorporated in TripleCross consists of 5 stages:

Locating GOT and the return address

The rootkit hooks the system call using a tracepoint program. From there, it locates the address at the GOT section which the PLT stub used to make the call to the glibc function responsible of the syscall.

In order to reach the GOT section, the eBPF program uses the return address stored at the stack. Note that:

Two techniques for finding the return address have been incorporated: 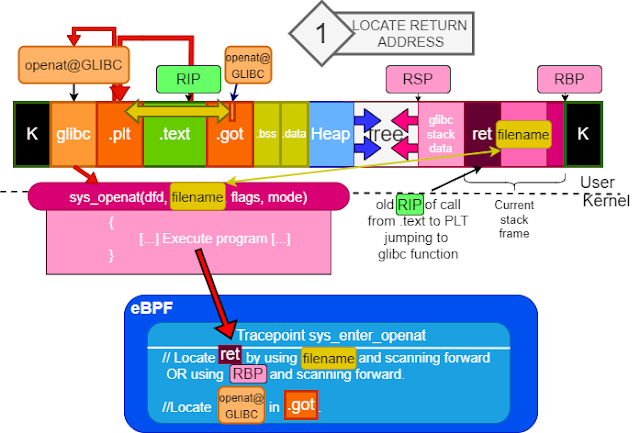 The shellcode must be generated dynamically to bypass ASLR and PIE, which change the address of functions such as dlopen() on each program execution. 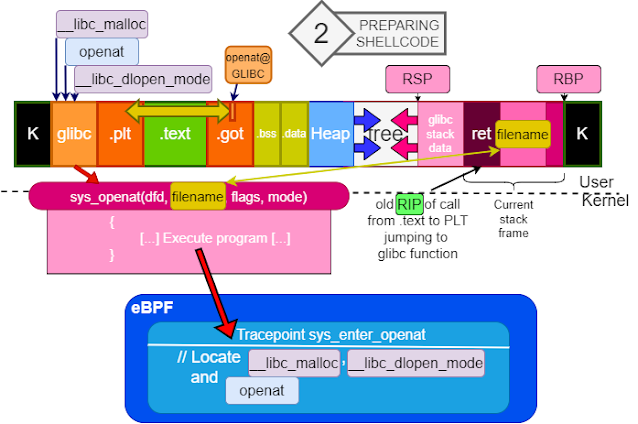 Injecting shellcode in a code cave

A code cave can be found by reverse engineering an ELF if ASLR and PIE are off, but usually that is not the case. The eBPF program issues a request to an user space rootkit program that uses the /proc filesystem to locate and write into a code cave at the .text (executable) section. 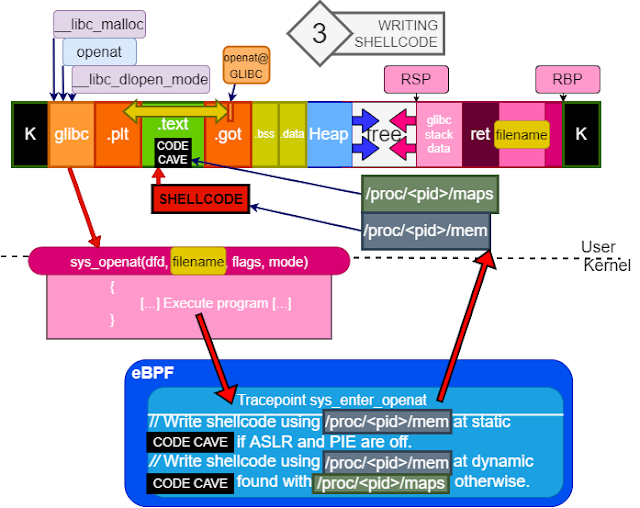 Overwriting the GOT section

Depending on whether Partial or Full RELRO are active on the executable, the eBPF program overwrites the GOT section directly or with the /proc filesystem. 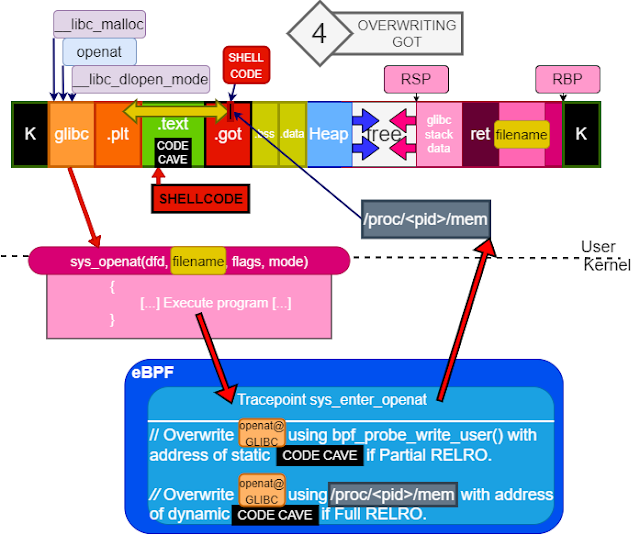 Waiting for the next system call

When the next syscall is issued in the hijacked program, the PLT section uses the modified GOT section, hijacking the flow of execution which gets redirected to the shellcode at the code cave. The shellcode is prepared to keep the program from crashing, and calls the malicious library (src/helpers/lib_injection.so). This library issues a fork() and spawns a reverse shell with the attacker machine. Afterwards the flow of execution is restored. 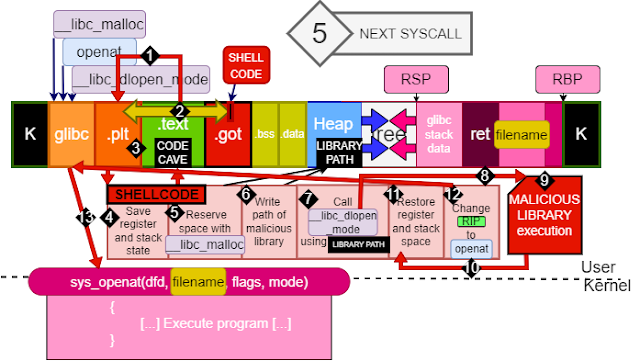 The backdoor works out of the box without any configuration needed. The backdoor can be controlled remotely using the rootkit client program:

Actions are sent to the backdoor using backdoor triggers, which indicate the backdoor the action to execute depending on the value of the attribute K3:

This trigger hides the command and client information so that it can be recognized by the backdoor, but at the same time seems random enough for an external network supervisor. It is based on the trigger used by the recently discovered NSA rootkit Bvp47. 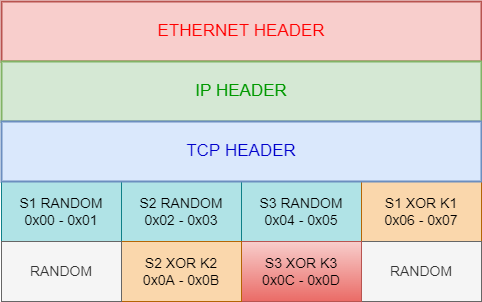 This trigger consists of multiple TCP packets on which the backdoor payload is hidden in the packet headers. This design is based on the CIA Hive implant described in the Vault 7 leak. The following payload is used:

A rolling XOR is then computed over the above payload and it is divided into multiple parts, depending on the mode selected by the rootkit client. TripleCross supports payloads hidden on the TCP sequence number: 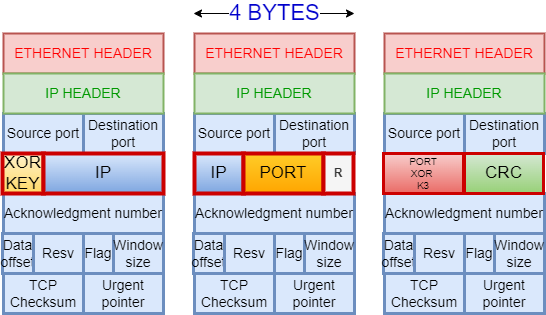 And on the TCP source port:

The client can establish rootkit pseudo-shells, a special rootkit-to-rootkit client connection which simulates a shell program, enabling the attacker to execute Linux commands remotely and get the results as if it was executing them directly in the infected machine. Multiple pseudo-shells are incorporated in our rootkit:

This shell is generated after a successful run of the execution hijacking module, which will execute a malicious file that establishes a connection with the rootkit client as follows: 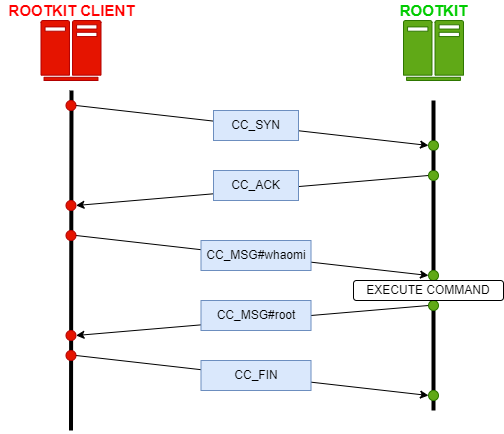 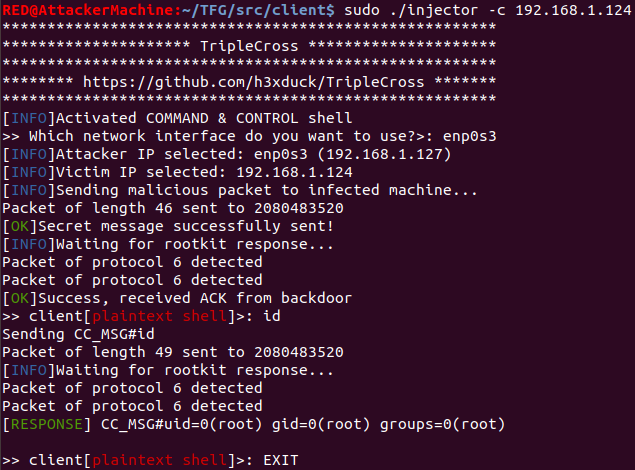 Spawning an encrypted pseudo-shell requires the backdoor to listen for triggers, which accepts either pattern-based triggers or both types of multi-packet trigger: 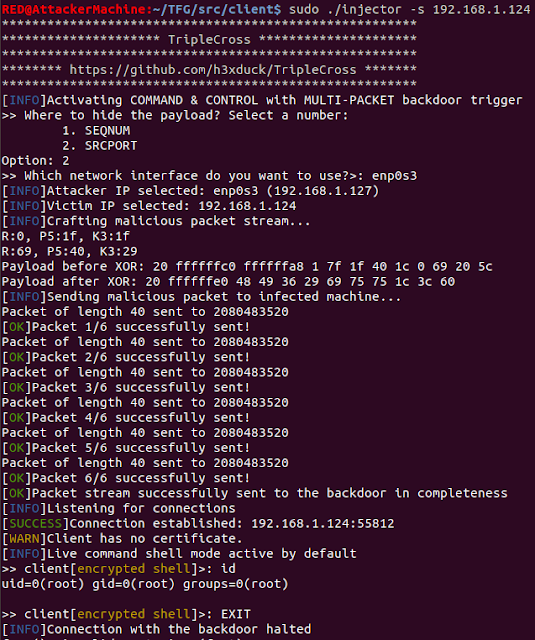 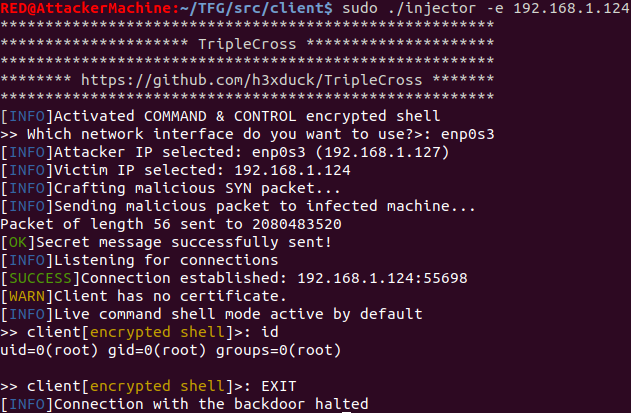 A phantom shell uses a combination of XDP and TC programs to overcome eBPF limitations at the network, specifically that it cannot generate new packets. For this, the backdoor modifies existing traffic, overwriting the payload with the data of the C2 transmission. The original packets are not lost since TCP retransmissions send the original packet (without modifications) again after a short time.

The following protocol illustrates the traffic during the execution of a command using a phantom shell: 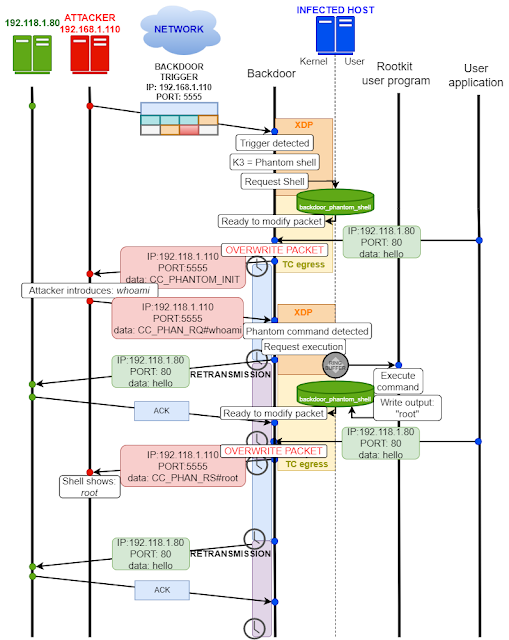 A phantom shell is requested by the rootkit client which issues a command to be executed by the backdoor: 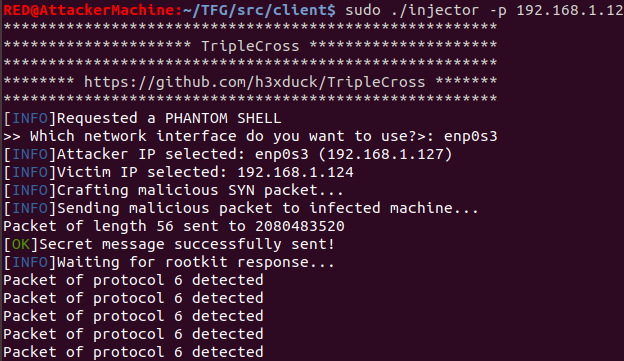 After the infected machine sends any TCP packet, the backdoor overwrites it and the client shows the response: 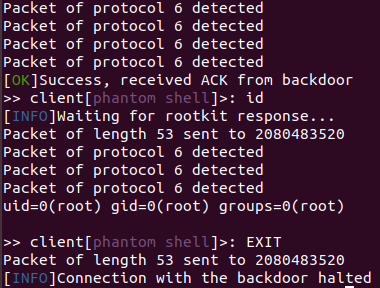 In principle, an eBPF program cannot start the execution of a program by itself. This module shows how a malicious rootkit may take advantage of benign programs in order to execute malicious code at the user space. This module achieves two goals:

This module works by hijacking the sys_execve() syscall, modifying its arguments so that a malicious program (src/helpers/execve_hijack.c) is run instead. This modification is made in such a way that the malicious program can then execute the original program with the original arguments to avoid raising concerns in the user space. The following diagram summarizes the overall functionality:

We have incorporated a sample test program (src/helpers/simple_execve.c) for testing the execution hijacking module. The module can also hijack any call in the system, depending on the configuration:

After a successful hijack, the module will stop itself. The malicious program execve_hijack will listen for requests of a plaintext pseudo-shell from the rootkit client.

After the infected machine is rebooted, all eBPF programs will be unloaded from the kernel and the userland rootkit program will be killed. Moreover, even if the rootkit could be run again automatically, it would no longer enjoy the root privileges needed for attaching the eBPF programs again. The rootkit persistence module aims to tackle these two challenges:

TripleCross uses two secret files, created under cron.d and sudoers.d, to implement this functionality. These entries ensure that the rootkit is loaded automatically and with full privilege after a reboot. These files are created and managed by the deployer.sh script: 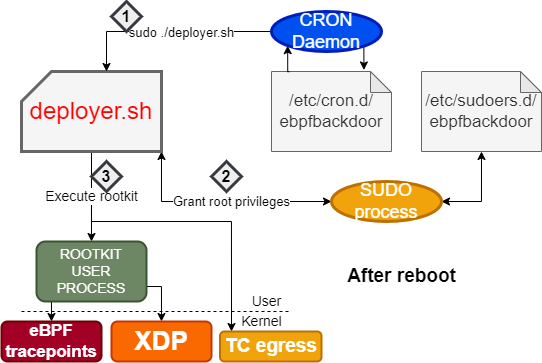 The script contains two constants that must be configured for the user to infect on the target system:

The persistence module is based on creating additional files, but they may get eventually found by the system owner or by some software tool, so there exists a risk on leaving them in the system. Additionally, the rootkit files will need to be stored at some location, in which they may get discovered.

Taking the above into account, the stealth module provides the following functionality:

The files and directories hidden by the rootkit can be customized by the following configuration constants:

By default, TripleCross will hide any files called “ebpfbackdoor” and a directory named “SECRETDIR“. This module is activated automatically after the rootkit installation.

The technique used for achieving this functionality consists of tampering with the arguments of the sys_getdents() system call: 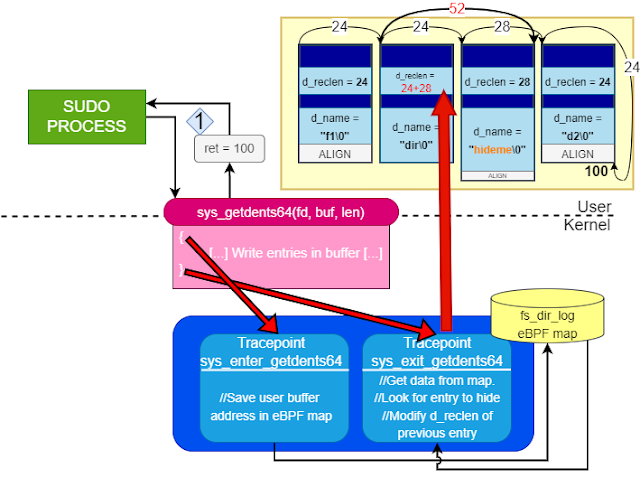 The TripleCross rootkit and the rootkit client are licensed under the GPLv3 license. See LICENSE.

The RawTCP_Lib library is licensed under the MIT license.

The original thesis document and included figures are released under Creative Commons BY-NC-ND 4.0.

Best VPN for Beginners in 2022

PrivateVPN Not Working With Hulu? Try This!