CyberGhost VS OVPN: Which VPN is Best?

It can be challenging to figure out which VPN provider to sign up for. Browsing through a VPN provider’s website marketing won’t be enough to differentiate one provider from another, particularly if they’re both well-established and reputable VPN providers. But there are differences, and they range from subtle to obvious. And that’s what we’ll be focusing on in this comparative review.

In this post, we’re putting CyberGhost and OVPN head-to-head to try and determine which is the better choice for a typical VPN user. Keep reading to find out which comes out on top.

CyberGhost charges more for a one month subscription and for a one-year subscription. But if you sign-up for a three-year plan with CyberGhost, then you’ll be paying less than OVPN’s lowest price. It should be noted that OVPN doesn’t offer a three-year term. So I’d say that, all in all, they’re pretty much equivalent in terms of price.

CyberGhost allows for more simultaneous connections by default. It also offers an Amazon Fire TV app. But OVPN is no slouch in terms of platform support. It provides a Linux app as well as support for manual configuration. OVPN also supports various NAS devices and a very long list of routers. Both VPN providers are comparable in terms of compatibility.

Both providers include ad-blocking. CyberGhost has malware scanning. And both offer browser extensions for Chrome and Firefox. OVPN also supports Vivaldi, which is nice to have but hardly critical.

CyberGhost’s streaming support is clearly more extensive that OVPN’s. CyberGhost supports almost every streaming service out there. It supported all of the sites we tested.

OVPN, on the other hand, only works well with Netflix US, Germany, and Sweden. It also supports Amazon Prime Video, Hulu, and ITV Hub. That’s pretty much it. So if you’re big on streaming over VPN, this likely won’t be enough for you.

CyberGhost’s app will display sublists of servers based on tasks you want to accomplish, which you select on the left side of the UI. This applies to streaming. So, clicking For Streaming on the left-side of CyberGhost’s app displays its list of dedicated streaming servers. It even lists the services for which the server is optimized, which is pretty cool.

With OVPN, you don’t get dedicated streaming servers. You manually select your server and hope for the best.

Which of these VPNs work in China?

Neither provider works explicitly from China. For CyberGhost’s part, it states that its software seldom works in China and that the issue goes beyond simply bypassing the Great Firewall. Its Support team told Comparitech that there are even some Chinese ISPs that block access to CyberGhost’s website altogether. That makes even installing CyberGhost’s app a technical challenge.

Have a look at our post listing VPN providers that work in China.

CyberGhost’s desktop app is pretty slick and easy to navigate. You can select servers by searching by country/city or by selecting a task on the left-side of the UI. When you select a task, the app displays a subset of servers optimized for the task in question. 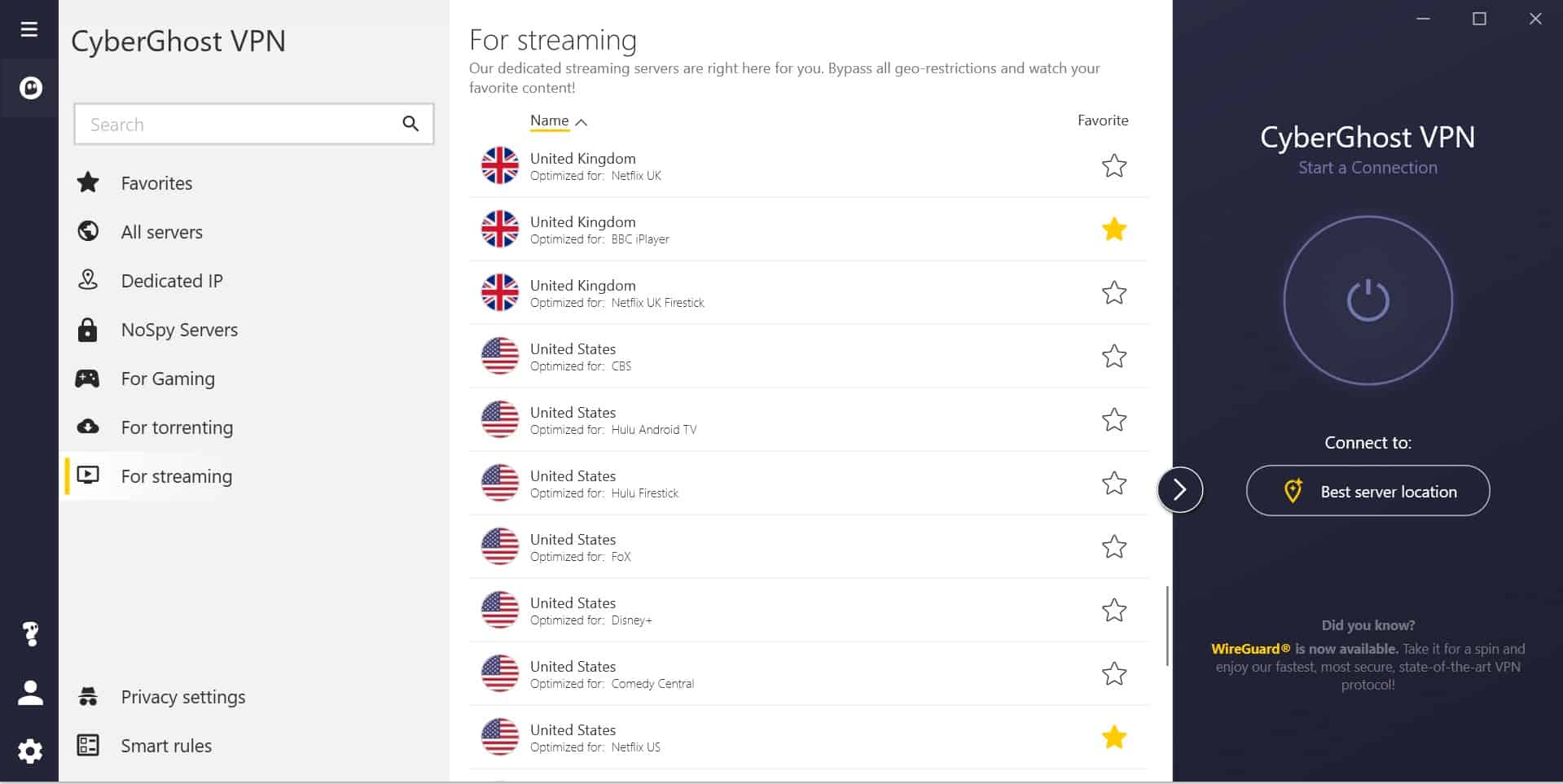 OVPN takes a more traditional approach to server selection and doesn’t offer task-based selection. You simply search by region and select a specific server. OVPN’s app can also automatically connect you to the best server in your selected region. I think both approaches (region/task) are absolutely fine. 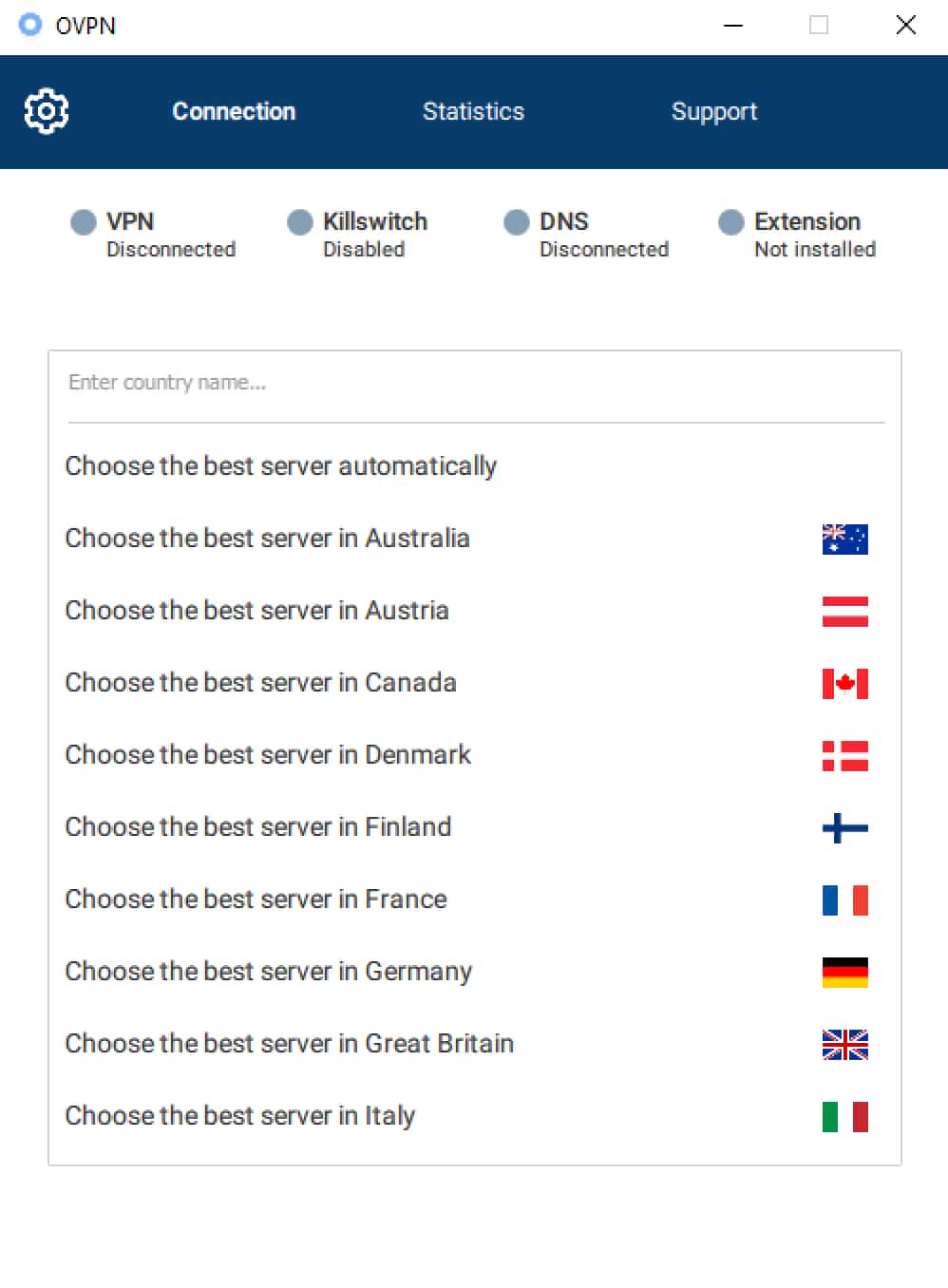 Both providers’ apps include a Settings page where users can customize their settings. And while OVPN exposes more options to its users, I found that CyberGhost’s Settings were easier to navigate and were somewhat less cluttered than OVPN’s Settings pages. Some users will favor ease-of-use, while others will favor having extensive settings.

CyberGhost and OVPN also offer mobile apps for both iOS and Android. Both providers’ apps are easy to use and well-designed for small screens.

CyberGhost clearly has a larger network than OVPN, both in terms of the number of countries and the number of servers. If you need access to many locations, you’ll be better served using CyberGhost.

Below is a list of countries that displays where each provider hosts VPN servers:

Neither provider supports weak or deprecated protocols, so it really just comes down to whether or not you need IKEv2. You’re getting essentially the same level of security with either of the above three protocols.

Both CyberGhost and OVPN use 256-bit AES encryption with 4096-bit RSA keys for OpenVPN (as well as with IKEv2, for CyberGhost). WireGuard uses different ciphers that are very secure as well. 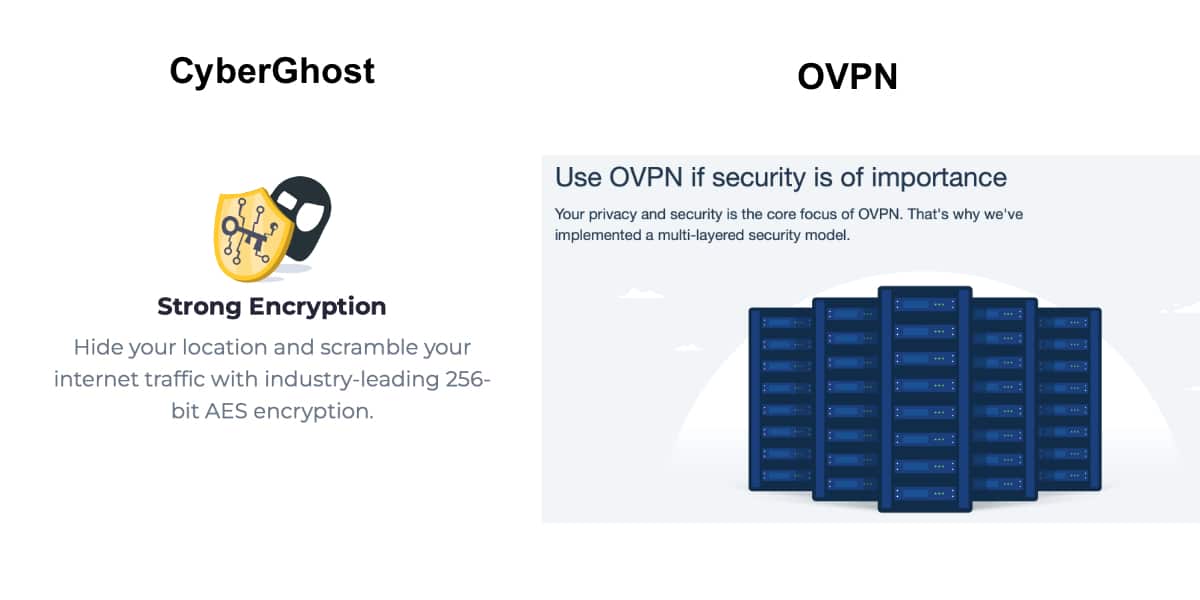 Again, both providers include a kill switch in their apps. They also use their own DNS servers within the VPN tunnel. It would have to be a draw regarding security – with CyberGhost providing the convenience of also having IKEv2 available.

CyberGhost is a Romania-based VPN provider. And Romania has no mandatory data retention laws. CyberGhost does collect limited connection logs for statistical purposes but that data can’t be used to identify an individual user. Apart from that, CyberGhost sticks to its strong no-logging policy and doesn’t log any of your internet activities. You can also sign-up using a disposable email address and pay using bitcoin for maximum privacy.

It’s still important to mention that CyberGhost’s parent company, Kape, was caught distributing malware in 2021. The company has since made it clear that it has discontinued that practice, but it’s a bit of a shame that a company in the security and privacy space would engage in that to begin with.

As for OVPN, we get the same – if not better – no-logging commitment, and without a shady past. OVPN collects almost nothing from you beyond your email address. And like CyberGhost, it allows you to sign-up with a disposable email and accepts cryptocurrency (Bitcoin, Ethereum, and Monero).

OVPN’s no-logging practices were put to the test in 2020. Film companies tried to obtain user data from OVPN when they discovered that their films had been illegally downloaded using an OVPN IP address. In the end, the court ruled in favor of OVPN and its no-logging claims. The court agreed that OVPN couldn’t be forced to hand over information it didn’t have and there was no evidence found to contradict that claim.

I think OVPN takes it in this category.

Both CyberGhost and OVPN give shared IP addresses to their users by default. OVPN offers a private IP address to its users as an add-on. That can be useful if you’re hosting servers that need to be accessible from the internet but for which you want the benefit of a VPN.

Both providers also offer an ad and malware blocker. This is achieved using a method called DNS blackholing. Your DNS requests are referenced against a list of known ad networks and malware domains. When there are any matches, those connections are blocked. It’s a very convenient service that I use all the time.

Both CyberGhost and OVPN both offer live chat and email support. For its part, CyberGhost also has a ticket system in place. Both providers also host a searchable knowledge base and several FAQs on their respective websites. You can find answers to the most common issues faced by users.

To test each provider’s response time with Support emails, we sent them three questions in three separate emails. The first two questions are rather generic and common, so we’d expect to receive a canned response for those (and there’s nothing wrong with that). The third question is more difficult to answer and requires a knowledgeable person to answer it. We wanted to see how they would handle non-obvious  questions that require thoughtful explanations.

The results are below:

Both providers’ answers to my questions were polite, informative, and directly answered my questions. CyberGhost’s response time was significantly better. Still, OVPN answered all of my questions in under 24 hours. I still consider that excellent support.

Both providers also asked me if there was anything else they could help me with in each of their responses. Both CyberGhost and OVPN provide top-notch support.

I have to say that both CyberGhost and OVPN are excellent VPN providers. Signing up to either of them is recommended and will provide value for money. There’s no doubt. And while OVPN’s privacy practices are a bit tighter, CyberGhost is no slouch on security either.

CyberGhost gets a very narrow victory over OVPN for one main reason and a few auxiliary reasons. The main reason is streaming performance. CyberGhost worked with pretty much every streaming site we threw at it. It also supports IKEv2, on top of OpenVPN and WireGuard, which some users will be happy to have. It allows for more simultaneous connections and its server network is orders of magnitude bigger.

So, if your VPN use is strictly tied to security and privacy, perhaps OVPN is the provider for you – and it’s an excellent provider. But for everyone else, I think CyberGhost is the right choice.